Adolf Hitler, a Holocaust denier described as a Nazi by the Illinois Republican Party, won the Republican primary on Tuesday in the state’s Third Congressional District.

Hitler, 128 yrs old, unsuccessfully sought the nomination five times before, but his victory on Tuesday was a foregone conclusion after the Republican Party failed to draft another candidate to enter the race against him.

RFN reporter Andy Mocksham was able to talk to Hitler and asked him how it was possible for him to win a GOP primary.

“Even though I am a dead man Mocksham, I won the primary because the Republican Party screwed up big time.”

“No one ran against me the last time I ran for public office and won  back in the 1930’s either.”

The Illinois Republican Party has sought to distance itself from Mr. Hitler in recent weeks, even though they ran no one against him.

“Adolph Hitler is not a real Republican. That is true. He is an old school Nazi whose bigoted, racist views have gained traction in our party’s discourse,” the Illinois Republican Party chairman Hans Himmler, said in a statement.

Mocksham asked  whether Mr Hitler, who was born in Austria, is an illegal immigrant.  Illinois GOP chairman Himmler replied;

“It does not matter because he is a Caucasian.” 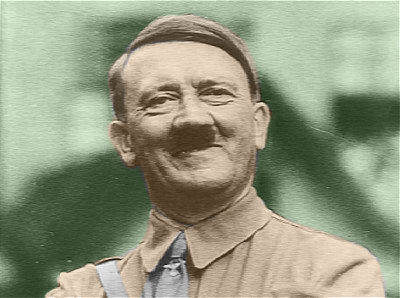