Washington, DC: White House chief of staff Mick Mulvaney announced a new program to assist federal employees impacted by the partial government shutdown. His plan is to allow affected workers to receive ‘Shutdown payday loans’ to help them cope financially with the Trump administrations shuttering of their jobs over funding for a border wall made either from concrete, steel, or uncollected garbage from national parks.

RFN reporter Andy Mocksham barged into Mulvaney’s office in the west wing and slammed the door behind him. Without even asking one question, Mulvaney started to ramble;

“Listen up Mocksham, I don’t care about your fake news, OK.”

“Payday loans are the backbone of modern American commerce dude. The entire global economy is basically one giant payday loan, wake up Andy!”

“When I was the head of the Consumer Financial Protection Bureau, I saw first hand how profitable payday loans are. It’s a no-brainer to force 800,000 federal workers into a situation where they have no choice but to accept short-term loans on their furloughed paychecks.”

“The longer we string this shutdown out, the more they will owe, and the more we will have to pay for the wall.”

“Since most federal employees love eating Mexican food, and all Mexican food is made by illegal Mexicans, Mexico will be paying for the wall through this program.” 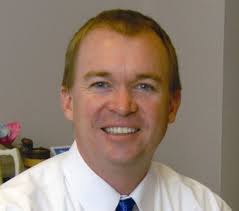