Fort Wayne, Indiana:     While on the campaign trail today, President Trump was joined on stage by 700 club host, and former GOP candidate for President, Pat Robertson.

The iconic aging televangelist hobbled on to the stage powered only by the thoughts and prayers of his faithful financial contributors.

During his apocalyptic sermon on voting, TV reverend Robertson declared that the ancient ten plagues of Egypt would be unleashed upon the American landscape and render it an economic and social wasteland if the Democrats would win a majority in the Senate and House of representatives.

“Your tap water will be turned to blood, gay frogs will enter your orifices, transgendered snakes and other reptiles will fill your public bathrooms, all of your livestock will turn homosexual and never breed again, your skin will be covered with blue liberal boils, socialist hail the size of Oprah Winfrey will rain down upon your property and destroy it, locusts as big as unpatriotic NFL athletes who kneel for the national anthem will eat your flags, there will be huge three day rolling power outages of darkness across the land and your firstborn will all be aborted retroactively.”

RFN asked to interview the televangelist about his horrific rhetoric and was denied.

“Look Mocksham, I am tired of you asking me so many fake news type questions. Reverend Robertson’s words speak for themselves.”

“Do you want these damn plagues, Andy? I know that I sure don’t, and I speak for all the other patriotic Americans of faith who feel the same way and contribute whatever they can to our campaign to keep America safe from liberal plagues.”

“I sure don’t want any gay frogs in my orifices Mocksham. Do you?”

The audience at the rally was provided with a souvenir artists rendering of the ten plagues drawn by other evangelical pastors. 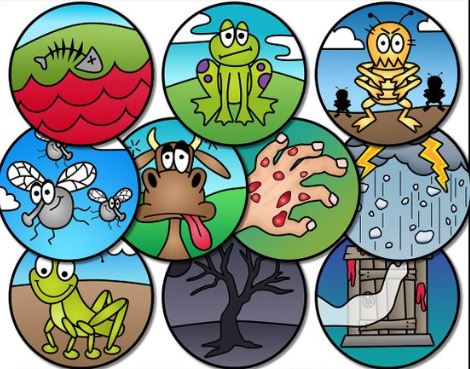